The return of Bez

Last years competition
Two new Freediving pool records were broken on May 31st 2014 in the second Manchester Freediving Pool competition. It is the eleventh competition / record attempt arranged by the group from the North of England called Apneists UK, which is run by Steve Millard www.learn2freedive.com . A handful of elite athletes came from around the UK to support the event, and a few newer freedivers came to get involved in their first competition.

The event was well received, other notable performances from Chris Crawshaw with a STA of 5 minutes 44 seconds, and DNF by Rebecca Ryan of 114 metres who came top out of the ladies. 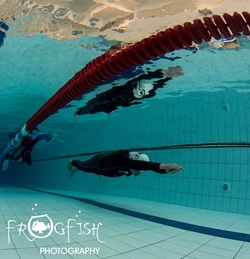 Congratulations to John Moorcroft on a new DNF record of 167m

Congratulations to Mike Benke on a new DYN record of 165m

We are all very happy Mudda

Photo courtesy of Frogfish photography
Freediving in the UK, Freedivers freedive together in Free diving competition to see who is the best Apneist