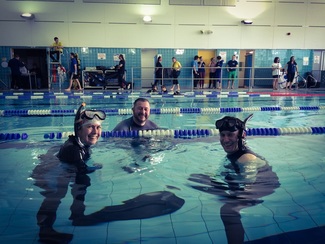 
A cry I make most years after organising the big events in the UK freediving calendar. But here again I find myself after having run it. Another year wiser, another year to reflect on why I put myself through it.
​

It does become a reflective process. I realise the privilege I have in being involved in such an amazing community, the Freediving community contains pretty much all of my closest friends,  it holds the people I hold in the highest esteem, it is a community I am proud to be part of. I try and build the community, and get more people involved, in whatever facet they choose, and the competition circuit is just one part of that.

I am humbled by the support I receive from the volunteer helpers, and by the fact the athletes turn up for the event and many have gone through lots of sacrifices to become the best they can be and appreciate the sponsors who help us with prizes and equipment. I like the fact that within a club structure we can have almost have as many supporting freedivers as athletes, every person can be encouraged to be involved in some way, whether it be coaching, judging, videography, photography or IT.

This year one question was repeatedly asked, 'how do you think it went?'.

It is a fair and honest question. I always try and think positively I always try and emit positive vibes, and generally it was again another success in terms of organisation. The reason for my hesitance in answering, and for not insisting that it was an outright success is the complete swing of emotions I feel on the day. I feel every success, and feel every failure. In this competition I had been involved in teaching, coaching or instructing over half of the line up. How can I be ecstatic and miserable at exactly the same time. It is like an emotional rack.

I try and get the point across that in a competition, you are competing on a day not of your choosing, but an arbitrary date, chosen at whim, and then the freediver is forced to perform on that date, they are subjected to stresses outside of what the sport is really about and have to dive to the second of when they are told. Of course with good planning a freediver can get prepared, but many freedivers have to work for a living, have families and friends and lives, which makes it difficult to train exactly as they would want. No wonder really that it does not always go according to plan. The dives that didn't go well on the day, hopefully strengthen the resolve of those individuals to train harder, become more prepared, and smash it next time. This is where champions are born. Failures on the day can be learned from, and used as an incentive to work harder for the next arbitrary date in the calendar or performance personal bests. 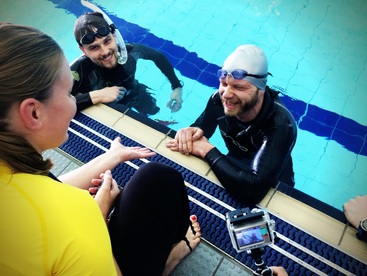 The journey is more important than the destination, and the competition day is simply a single stepping stone to further improvements.


Point score results are below, well done to all of those who turned up and competed, thank you to all those who helped on the day and helped athletes and the clubs on the run up to the competition. Congratulations to our podium divers, you did very well. The winner was the highest point score from STA added to either a DYN dive or a DNF dive (x 1.3)

Thank you to everyone involved

Download File
Freediving in the UK, Freedivers freedive together in Free diving competition to see who is the best Apneist